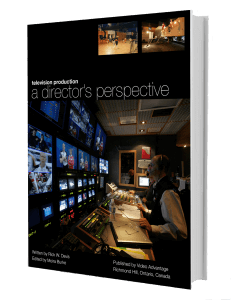 Television Directing is a creative career like few others. If travel and high-paced action sound like something you can live with, then this is the career for you.

This ‘How to’ book is the perfect read for someone wanting to understand the television business from an insider’s perspective.

Excerpts from Chapter 4, ‘A Director’s Day’:

“A typical Director’s day will last approximately 15 hours. This may sound like a daunting task but it’s not really. The day travels up a gradual intensity slope with your full energy and focus not challenged until about 10 hours into your day. The last few hours are where the real payoff exists. This is when the juices start flowing, your power levels climb and you get into your zone.

Before we get to the actual day, allow me to give you a bit of background as to what got you to the actual day of the television event itself. For our purposes, I am going to choose the sport of basketball as an example. Let’s take it a step higher and make our example the pinnacle of the sport. I will discuss the pre-production and coverage of an NBA regular season game.”

The director gives the standby to roll VTR gold and track tape.
The script assistant continues, “In 5, 4, 3, 2…”

The director gives the “roll gold” and “track gold” cue and the pre-recorded show tease and opening animation rolls to air.

As the pre-taped opening ends the director provides crew instructions, “ready to go to camera 2, with graphics hot”, meaning the graphics are in standby mode. “open their mics”, “Pan 2”, camera 2 begins a panoramic pan of the inside of the arena, “dissolve 2, fly the graphics” the technical director dissolves the sources and the graphics operator triggers the titles to fly onto the screen.

The director cues the announcers to welcome the audience.

You’re ON THE AIR!

The director opens a switch to speak to the announcers, “ready on camera”, then to the rest of the crew “Ready Camera 6 on a 2-shot with a slight zoom – Zoom 6 – dissolve camera 6”.

The announcers introduce themselves to the audience and begin to provide details as to what will unfold over the course of the show.

As the commentators make reference to key players, the director cuts between cameras which have been instructed to locate and provide images of these athletes.

During the hour before the game, camera operators provided shots of various players warming up. These images were recorded by the videotape operators. A short edited montage or “bumper” was created to end this segment of the show. This is used to lead the audience to the first commercial break.

The on-air talent is given the cue to wrap up their thoughts.

The director continues with crew instructions, “ready to go to bumper from VTR blue with graphics hot for a blind reveal, ready to sneak in your music” the audio cue given to the A1. “Music in – roll blue and dissolve blue” to the technical director who mixes the sources. The graphic operator activates the lower third graphic revealing the names of the two teams.

The announcers look at their court side TV monitor and add a voice-over to accompany the images being shown, “…and we’ll be right back with the opening line-ups after this short break…”

“Rick’s concise and informative overview is written with the
same enthusiasm that Rick brings to the director’s chair on location.
A great read for anyone considering a career in television production.”